Branch cache is a feature introduced with Windows 2008 R2 that allows systems within the same subnet and separated from a content source (such as a WSUS server) to share downloaded content locally rather than each system having to traverse a latent network link back to the content source. Branch cache has two modes of operation – distributed cache mode and hosted cache mode. SCCM only supports distributed cache mode.
As mentioned, branch cache is a function of the OS and not of SCCM but, with the release of SCCM SP2, we now are able to leverage branch cache on enabled servers. When we find branch cache enabled we use it – there is no special SCCM configuration requirements for branch cache other than what is likely in se in most environments anyway. We will highlight those shortly but to start a diagram of a sample configuration might help explain how this is all setup. 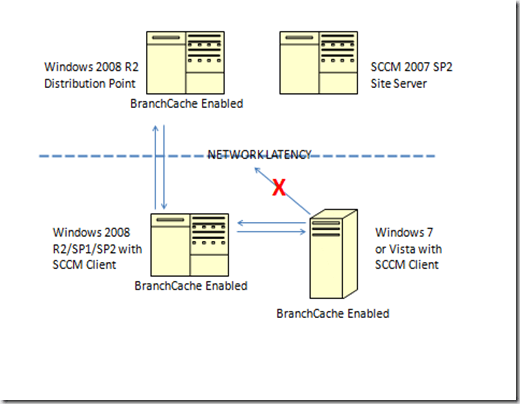 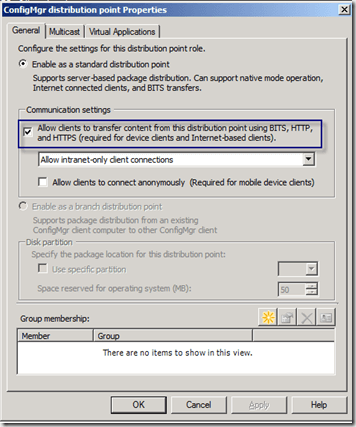 The only other requirement is that your advertisement be set to download and execute locally. 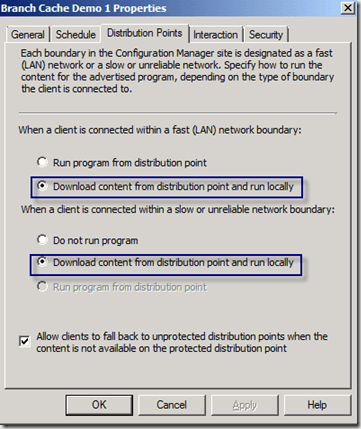 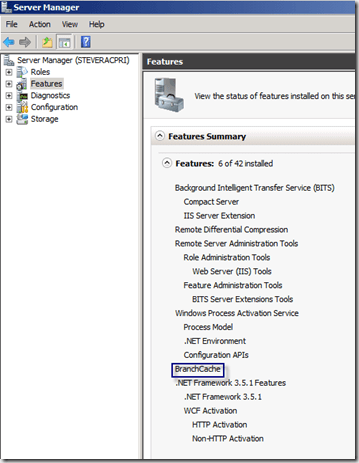 Next, we have to configure branch cache on our clients. This can be done through local policy on each system or – much easier – through domain policy. On my domain controller I open the group policy management console. In my lab I created an OU for just the systems I want to enable for branch cache and I created a GPO to enable branch cache. 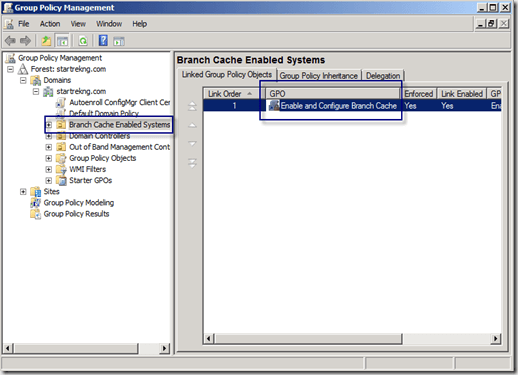 Editing the properties of the GPO we have two places to configure. First, is branch cache policy. Here we enable branch cache, set distributed cache mode, define the speed that we consider to be a latent network (default 80 ms) and configure the percentage of disk space to allocate to branch cache activity. 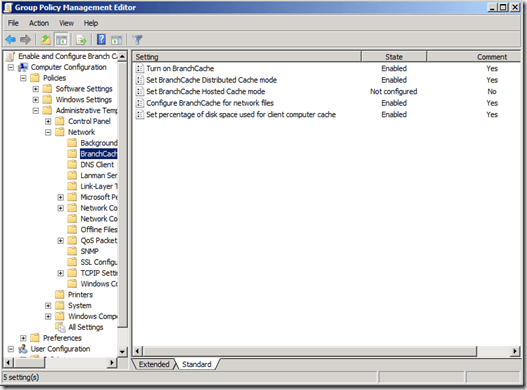 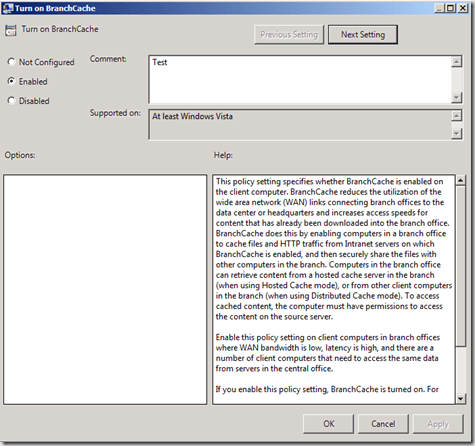 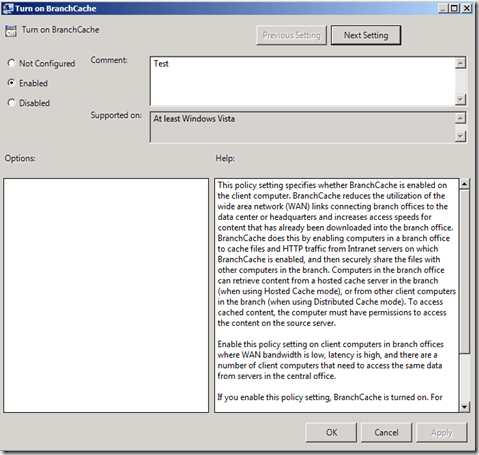 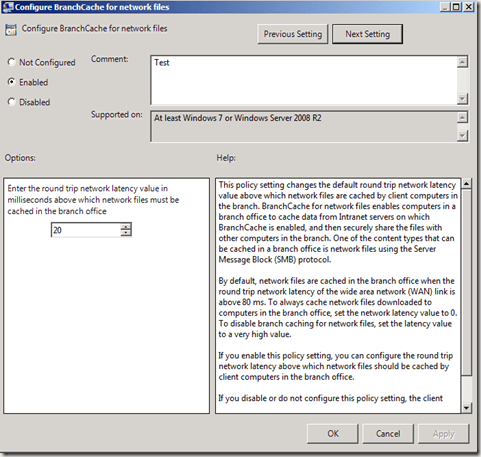 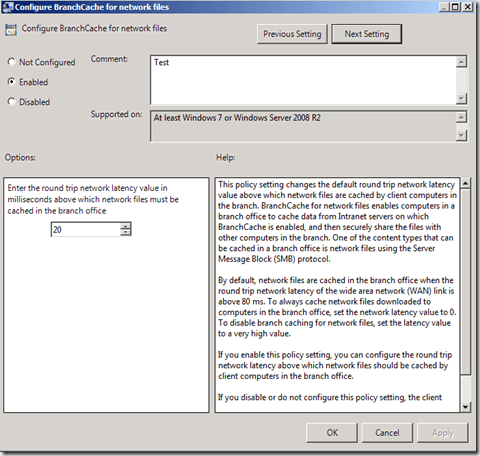 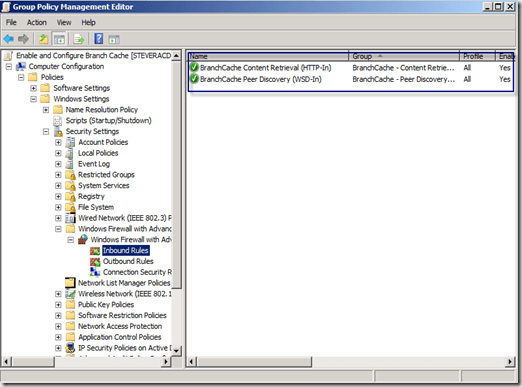 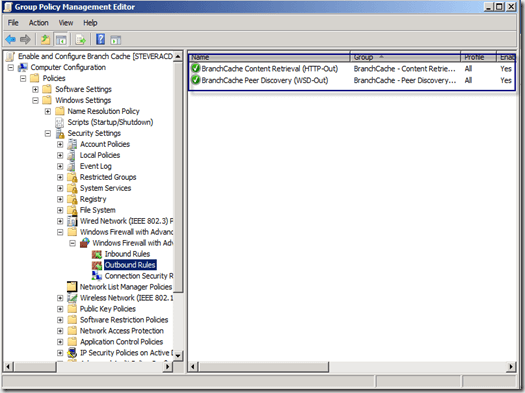 Both the inbound and outbound firewall rules are accessible on the predefined list – so configuring them is as easy as selecting from the drop down menu when configuring a new rule. 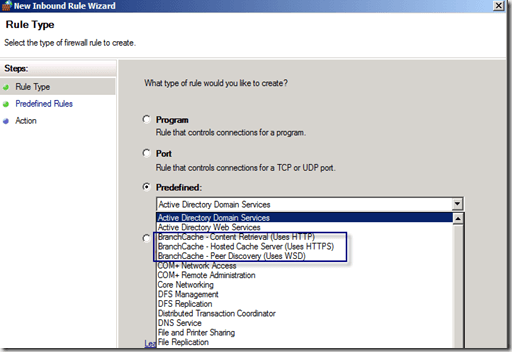 OK, so all of this is configured – how do we know if it’s working? To test, I setup a package and advertisement. When testing it’s important to understand that once the package is downloaded and cached, you have to either modify the content or setup a new package because unless there is a change, clients will always pull the content from the cache after the first download due to the latent network conditions.
For the test, I start with a fresh package. The client that will download the content first will have to go to the distribution point – nothing will come from the cache since no content has yet been downloaded. 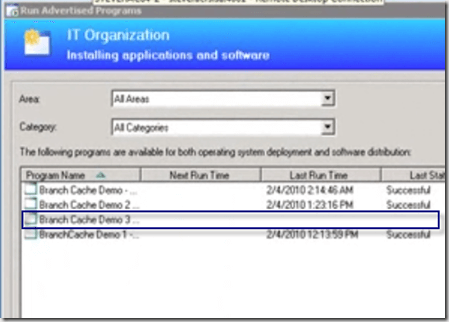 With all of this I’m ready to start the download but to simulate a latent network in my lab I must first start a tool that will ‘inject’ latency into the network connection between the distribution point and my first client. I’ll use a tool we have internally to introduce a 30 ms latency – I will maintain this latency throughout my testing. Note that my policy settings above consider any network more latent than 20 ms to be slow. 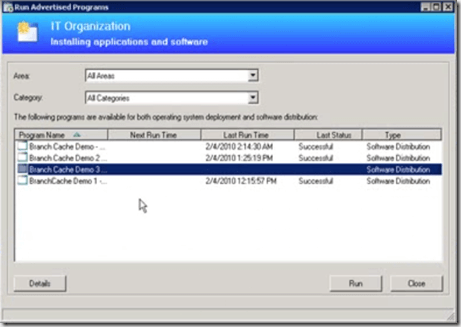 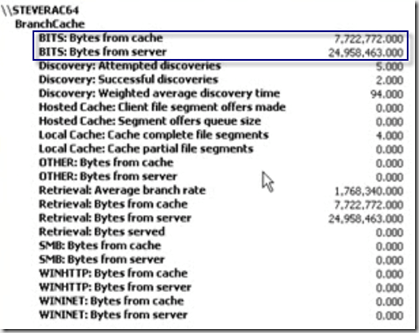 We initiate the advertisement as before and downloading begins.
We allow the download to finish, complete the advertisement and then look back at our performance counter numbers to see what happened.
By looking at our counters we can see that we did pull the content from our peer caching partner – so branch cache worked.
Another way we can tell that our package came over from branch cache is by looking in the event log on the system as show below. Look for event 60 and on the detail tab look for the peerProtocolFlags value. If it is set to 1 then branch cache was used to deliver the content. Thanks to my colleague Frank for the tip! 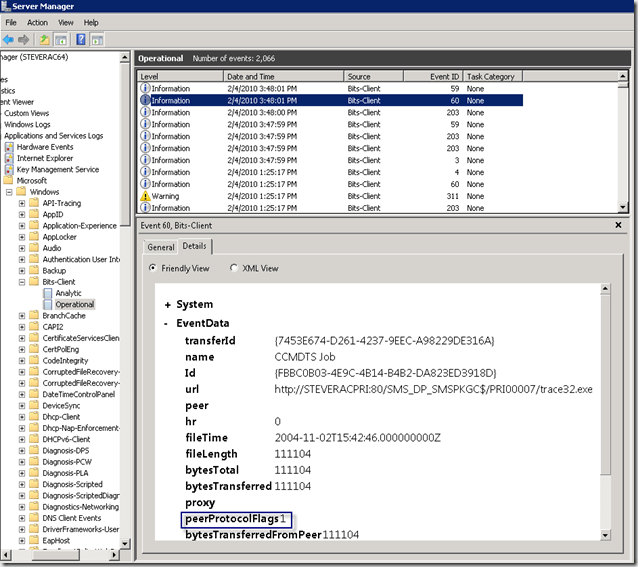 Branch cache is just one more option available to administrators to help deliver content to clients efficiently and reduce load on the network. It’s not difficult to setup and offers notable performance advantage – defiantly worth taking a look.

Deploying Office 365 to a Pilot Computer

This website uses cookies We use cookies to personalize content and ads, to provide social media features and to analyse our traffic. We also share information about your use of our site with our social media, advertising and analytics partners who may combine it with other information that you’ve provided to them or that they’ve collected from your use of their services.OkPrivacy policy